At its annual IO conference Wednesday, Google unveiled a slew of new products, features, and services that will roll out over the following months. We got a peek at a new Pixel tablet, watch, and phone, a new budget Pixel 6a, the first Android 13 public beta, and exciting search, AI, and app updates.

But here at Macworld, we couldn’t help but notice how familiar many of the announcements sounded. There were more than a few features unveiled at IO that are seemingly ripped straight from Apple’s playbook. Here are 5 features coming to Google and Android devices that Apple users have been enjoying for years:

One of the biggest app announcements at IO was the conversion of Google Pay to Google Wallet. Granted, Google Wallet was a thing before Apple Card, but this latest iteration takes more than a few cues from the iPhone app. The new Google Wallet, launching soon, is your one-stop place for your digital life, storing digital IDs, boarding passes, concert tickets, vaccination cards, loyalty cards, car keys, and of course, credit cards. Speaking from experience, Android users will love it.

To put it mildly, Google’s tablets aren’t exactly in the same league as the iPad. With Android 13, Google is looking to change that by stealing a little from Apple’s awesome tablet experience. Among the new features coming to Android tablets are easy multitasking that lets you use apps side by side and new interfaces “to take full advantage of the extra space including YouTube Music, Google Maps, Messages and more.” We’re not sure if that’s gonna put much of a dent in Apple’s tablet dominance, but hey, better late than never.

Apple users have long had the ability to copy something on their iPhone and paste it on their Mac thanks to the power of Handoff and iCloud, and now Google is bringing the same thing to Android phones and tablets. According to Google, “you’ll soon be able to copy a URL or picture from your phone, and paste it on your tablet.” The system (seen below) seems a bit clunkier than Apple’s utterly seamless Universal Copy and Paste, but hey, it’s a start.

Google unveiled and teased a bunch of hardware announcements during its IO keynote, including the new budget Pixel 6a, but the most intriguing was the Pixel Buds Pro. While no one would confuse the Pixel Buds A-Series wireless earbuds with AirPods, the Pixel Buds Pro have a very similar feature set to AirPods Pro. You get noise cancelling, transparency mode, spatial audio and ‘find my’ tracking, and an in-ear design that seems awfully similar to the rumors of the AirPods Pro 2. Call them rivals if you must, but we’ll just call ’em copycats.

Google stopped a little short of releasing its first ever wearable at Google IO, but it did finally confirm the existence of the Pixel Watch. Like other Android Wear OS watches, it has a circular design with a fairly sizable bezel and a new “tactile” crown that appears to be Google’s version of the Digital Crown on the Apple Watch. We don’t know if it’ll be as smooth as Apple’s or have a buillt-in ECG sensor, but the concept and the look is practically identical. 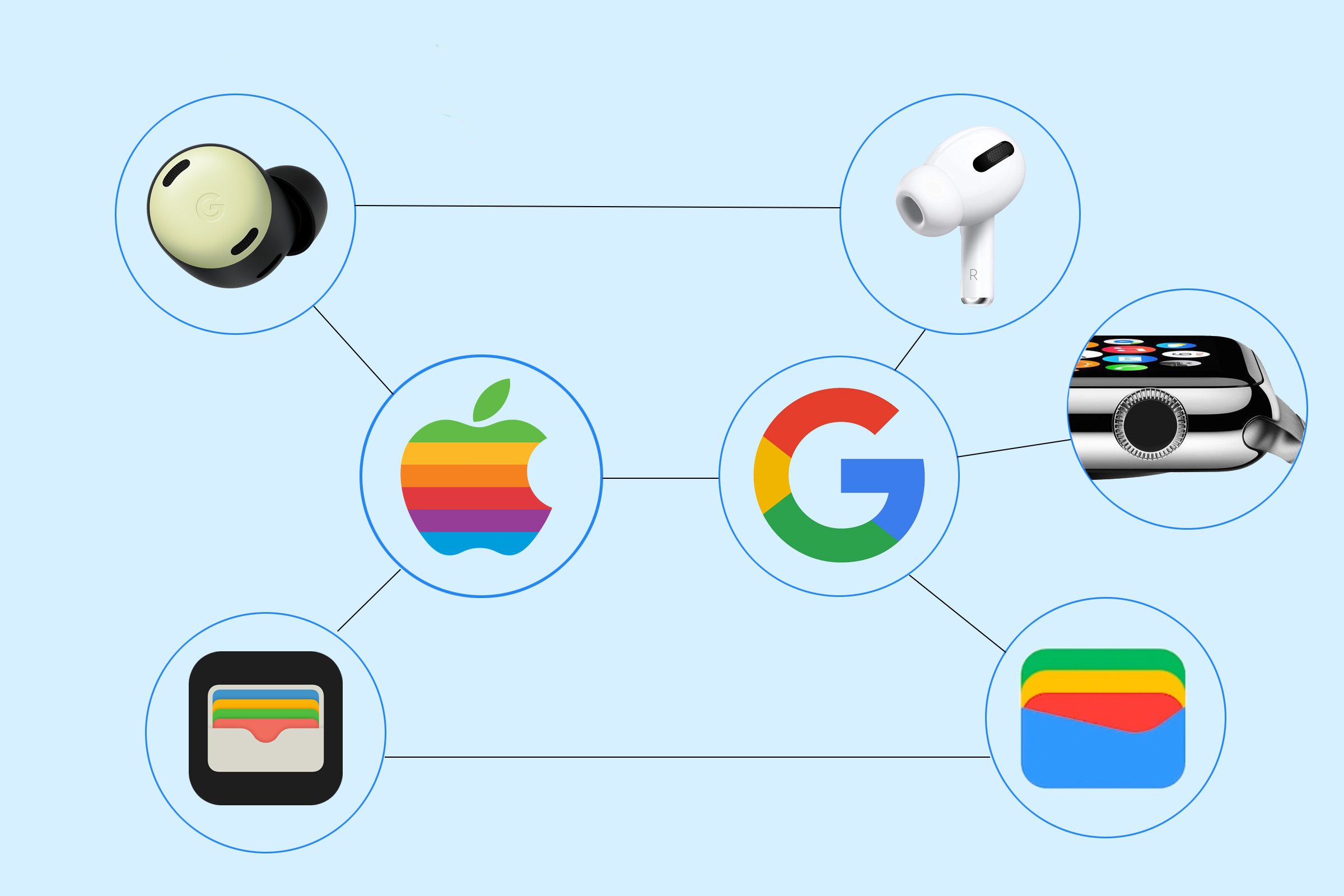