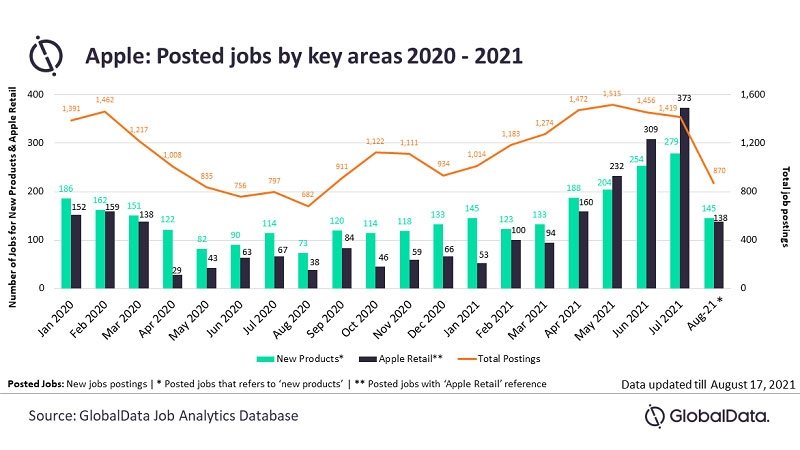 Hiring data suggests Apple is developing a host of new home products and services while preparing for a swell of retail customers ahead of an expected “iPhone 13” launch.

The company has increased hiring to bolster its product development and retail operations arms over the past few months, according to analysis of Apple job listings conducted by GlobalData.

Apple’s job postings, which are readily accessible through the company’s website, increased 78% year-over-year in July. While the tech giant routinely advertises for

roles attached to the development of “new products,” that category grew from 130 jobs in March to more than 270 jobs in July.

Of note, a listing for “Product Manager, Home Services” hints at work on in-the-home products like Apple TV, HomePod mini and HomeKit. The post noted ideal candidates must have work experience with home services providers, builders and technology providers, pointing to an ongoing evolution of the HomeKit platform.

A recent report from Consumer Intelligence Research Partners found Apple’s HomePod and HomePod mini accounted for just a sliver of the overall smart speaker market, with Amazon’s Echo line gobbling up a 69% share.

Apple is rumored to be working on next-generation designs for its at-home suite of hardware including a HomePod with integrated touch screen and an Apple TV with built-in camera and HomePod speaker capabilities.

A significant portion of the new listings in July — more than 370 posts — were retail positions. The uptick is thought to be related to the reopening of U.S. stores and the launch of upcoming products this fall.

“Apple is expanding its product and service portfolio while readying to launch its popular iPhone devices, along with other products,” said Ajay Thalluri, business fundamentals analyst at GlobalData. “The company reopened most of its stores in 2021, which led to an elevated need for new hires who will be responsible for helping customers set-up their devices.”

According to the report, “Specialist: Full Time and Part-Time” roles jumped from 94 jobs in May to 160 in July, with jobs located in Australia, China, Thailand, the UAE, the U.S. and the UK. Beyond the online postings, Apple is actively recruiting for retail positions at colleges and universities in Canada and U.S.

Other listings suggest imminent expansions into new regions, similar to the launch of an official online store in India last September.