This turned out to be a far more exciting week for Nintendo fans than previously expected, thanks to showcases for both Splatoon 3 and Monster Hunter Rise Sunbreak DLC that gave us tons of insight into upcoming features and modes. As part of the Splatoon 3 Direct, we also learned of three new Splatoon amiibo that will release this year.

In other news, someone recently discovered that a classic SNES game has secretly offered two-player all along.  Plus, we finally found out when Kirby Dream Buffet will release and how much it will cost. Want more info? Read on!

On Wednesday, Nintendo’s Splatoon 3 Direct gave us 30 minutes of information about the upcoming game. Much of that half hour was jam-packed with tons of new information, including new abilities, weapons, features, and characters.

Perhaps the biggest announcement was that Splatoon 3‘s very first Splatfest will have three competing sides to choose from instead of only having the traditional two. The topic: Rock, Paper, or Scissors?

Splatfest will take place on Aug. 27 from 9 a.m. PT–9 p.m. PT. As part of this, we got to see the three new idols who are all part of Deep Cut. They are Shiver, an Octoling with blue hair (Rock); Big Man, a large stingray (Paper); and Frye, a yellow-haired Inkling (Scissors).

Another exciting announcement was that we’ll be getting Splatoon 3 amiibo. There’s a purple-haired Octoling, a yellow-haired Inkling, and a Smallfry surrounded by Salmon eggs and blue paint. While it’s unclear what exactly these amiibo will do in the game, we do know that they will be releasing “this holiday.”

The game file will only take up 6GB of space when it launches on Sept. 9, but you’ll want to make sure you have enough on your microSD card all the same.

This was a busy week for showcases since the Monster Hunter Rise Sunbreak Digital Event also took place on Tuesday. Here, we learned more about new monsters coming in the update, as well as new Anomaly quests that started coming into the game on Aug. 10.

Hunters who reach Master Rank 10 in the Sunbreak DLC unlock the ability to go up against Gold Rathalos, Silver Rathian, Lucent Nargacuga, and Seething Bazelgeuse — all formidable monsters in their own right. Lucent Nargacuga is especially dangerous since it can turn invisible for stretches, making it hard to pinpoint.

The Anomaly quests present the ability to fight frenzied monsters, a new kind of challenge. As we now know, frenzies are caused by the vampiric Elder Dragon Malzeno. The leech-like creatures clinging to its body, called Qurio, suck the life from others and cause creatures to go crazy.

Weekly updates are also incoming, bringing Dual Threats, a mode that gives you the objective of defeating two powerful monsters instead of just one. To initiate these, you’ll need to talk to the Courier and discuss “Add-on Content” with them. Even more big updates are incoming, so we’ll have to wait and see what Capcom has in store.

Thanks to a tweet from Nintendo on Thursday, we now know that Kirby’s Dream Buffet is rolling out on Switch next week, Aug. 17. Additional information was also provided for the competitive multiplayer game, including modes, character customization, and pricing.

Players can participate in Gourmet Grand Prix, Race, Minigame, or Battle Royale modes, and each offers a different challenge to keep things interesting. To help you race ahead of the competition, you can use Copy Foods to gain different abilities. For instance, Burning Pepper makes you go faster, while Hyper Tornado allows you to spin and pull items in like Strawberries so you can get stronger. Players can also choose the color of their Kirby character and can unlock silly hats for the puffball to wear.

It’s a cute, simple multiplayer game that looks like it could be enjoyed by people of all ages. The lack of complexity might have something to do with the low price tag, too. Kirby’s Dream Buffet sells for only $14.99 and is currently available for preorder on Nintendo’s website.

There’s one big thing to be aware of, though. When looking on the official website, I found that the game can only support up to two players on a single Switch, but if you want to have a local four-player game, two Switch consoles must be used. Considering how big TV screens are these days, you’d think they’d allow for four players locally. The game also offers online play for up to four players who have Nintendo Switch Online, so it’s likely you can play with your friends, though no party codes have been mentioned yet.

If you’re on Tiktok, then you might have seen a popular video showing several different people dressed up like various Waluigis for a bachelorette party. The playful variants say who they think will get the drunkest during the course of the evening and introduce themselves as Cowboy Waluigi, Sexy Firefighter Waluigi, Cult Waluigi, Chef Waluigi, Pirate Waluigi, Strongman Waluigi, and Elvis Waluigi (the bride).

While to some of us who understand the charm of the much underappreciated evil Luigi doppelganger, some people might be confused by this party choice. But thanks to Kotaku, we know why this was the bride, Emily Yates’ (a.k.a. @cherriessorbet on Tiktok), preferred way to celebrate.

“I knew when I was thinking about my future bachelorette party that I wanted to do a chaotic costume night. I’ve seen some really good ones online themed around Guy Fieri and Shrek, but I wanted something I hadn’t seen yet!”

She went on to explain he’s, “just a lanky being of pure chaotic energy.” Seems like a perfectly silly evening to have with your closest friends. Although, she says that when she first told people about her idea many people were confused and couldn’t understand why she would do something like this. But as she said, “It doesn’t really make sense, and that’s why I wanted to do it!”

The group says it received a lot of positive reactions when they went bar hopping on a Tuesday night and have been happy to find that every comment they’ve read on the video has been “very positive and wholesome.”

Despite the hilarious bachelorette party, Yates says she intends to have a “traditional” wedding. So don’t expect to see a follow-up Tiktok of Elvis Waluigi getting married.

We’re currently on Wave 2 of the Mario Kart 8 Deluxe Booster Course Pass, but it seems that the coding within the update actually had more information on following courses than Nintendo wanted us to know about. We’re about to discuss spoilers so if you don’t want to know anything more stop reading here.

According to Oatmeal Dome on Twitter, “Nintendo accidentally left many music preview files in the version 2.1.0 update, allowing us to identify multiple unreleased courses!” In another tweet, they go on to explain that while Nintendo deleted the music files from the ROM themselves, additional files stored in a separate place that contained music file info hadn’t been deleted.

With this information, dataminers could determine all but six of the courses in the next four waves. Of course, it’s good to take this all with a grain of salt. It’s possible the cups and courses, or at least the way they line up, could change between now and when the next waves release.

Turns out Super Punch-Out!! has had a secret two-player mode the whole time

Games can hold secrets for years without getting discovered, and we just learned this week that this was the case with Punch-Out!! (thanks NintendoLife). Turns out that this popular SNES game from 1994 secretly had a two-player mode all along, but it was only just discovered 28 years later.

You don’t even need to hack the game or have any additional accessories to access the multiplayer mode. Just have the second player press the Y and R buttons and then have player one press the Start button. Crazy right? Makes you wonder what other classic games out there are still hiding an undiscovered mechanic.

This fall will be exciting

With five Nintendo Switch exclusive AAA games in the pipeline the next three months will be very interesting, indeed. Kirby’s Dream Buffet still has yet to be given a release date, but it’s supposedly launching this summer. Then there’s Splatoon 3 blasting onto Switch on Sept. 9, Mario + Rabbids Sparks of Hope launching on Oct. 20, Bayonetta 3 releasing Oct, 28, and last but certainly not least, Pokémon Scarlet and Violet launching on Nov. 18.

I’ll be here to cover any exciting news that gets revealed or leaked from these highly anticipated games, so check back for each week’s Nintendo recap. 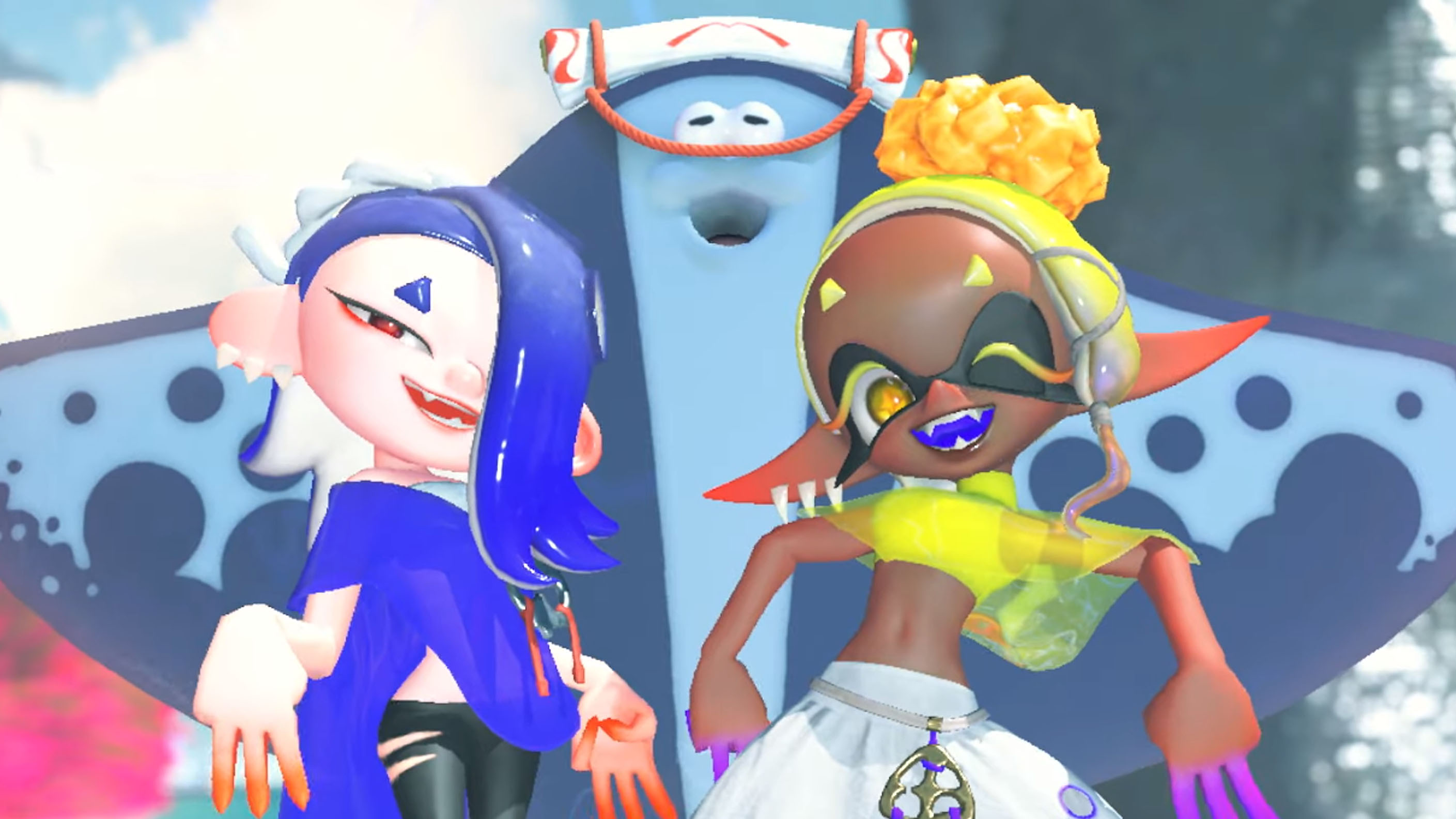