Recording the iMore Show on my iMac has given me a plethora of experience with USB microphones for Mac, and HyperX has been putting out some quality products recently. The DuoCast is no exception.

I’ve been using the HyperX DuoCast for about a month or so, and not only have I recorded podcasts and attended my fair share of virtual meetings with it, but I also plugged it into my PS5 while I was gaming with some friends. On all accounts, it worked very well, and I was pleasantly surprised at its performance. But, it has the same drawback I have mentioned with other HyperX microphones.

The HyperX DuoCast is the newest USB microphone in HyperX’s lineup, with a starting price of $99.99. You can find it at several retailers, like Best Buy, the HP store, and the HyperX store itself. It currently isn’t available on Amazon like other HyperX microphones.

It only comes in one black colorway right now, but HyperX did recently release a white version of its QuadCast S, so it may come in different colors down the line.

First things first, the DuoCast is truly plug-and-play with Mac, meaning there are no drivers, no firmware updates, and no setup processes to worry about. You just plug it in and start talking. While this isn’t surprising for one of the best USB microphones (opens in new tab), you’d be shocked by how many microphones can have little hang-ups upon initial setup these days.

Once you do plug in your HyperX DuoCast, you’ll be treated to up to 24-bit/96Hz sound recording, which sounds excellent. I have been using the DuoCast as my main microphone for work meetings, catching up with friends and family, a gaming microphone with my PS5 (because why not), and, most importantly, recording the iMore Show podcast. In all instances, my voice sounded clear and crisp.

Like the HyperX QuadCast S (the DuoCast’s big brother), this microphone also comes with a built-in pop filter, which works decently well if you’re using it at a reasonable distance. When you get a little closer — like you would when recording a podcast — you may want an external pop filter to help with those popping P’s. Either way, many microphones don’t even come with a pop filter, so this is a big plus in my book. It makes the run-and-gun aspect of the microphone much stronger. Plus, with the physical gain control knob located on the back of the microphone, it’s easy to keep any background noise in check.

The versatility of the DuoCast is super useful as well. Much like its name implies, the DuoCast can record both in a cardioid or omnidirectional pattern. While I suspect the cardioid is the most common use case for a microphone like this (it’s used for recording a singular source of sound, like your voice), having the option to record omnidirectionally is nice when you need it for capturing the soundscape of a room, for example.

Lastly, the design of the HyperX DuoCast is not only practical, thanks to its built-in shock mount and the ability to be placed on a boom with ease, but also its style. Its minimalist design will likely feel at home on any desk, but the LED lighting strip that can change colors or be set to certain patterns with software (more on that later) is a nice touch to add a little pizazz.

HyperX is a gaming-focused accessory company, so a little RBG lightning is par for the course, but I like how the company added the little touch of the lighting strip, which shows the gain in a nice, visual way. It makes it easy to adjust the gain without looking around at the back of the microphone.

The DuoCast falters for Mac users exactly where its other microphones did: The lack of software makes the device less customizable on Mac.

On a Windows PC, HyperX’s Ngenuity software can customize the RGB lighting strip, but there’s also some sound tweaking you can do, including adding some effects to the microphone. If you’re just looking for a plug-and-play microphone, this won’t matter to you at all — much like it never bothered me — but it’s worth pointing out that it has limited Mac functionality.

Worthy of a mention also is how the microphone itself saves its settings, so if you plugged the HyperX DuoCast into a Windows machine and used the Ngenuity software, you could then plug the microphone into your Mac and with those settings are enabled. So there is a workaround if you want to put in the effort.

Much like how the HyperX QuadCast S and Blue Yeti (opens in new tab) faced off in terms of price and features, the DuoCast’s most direct comparison is the Yeti Nano.

Both microphones will cost you around $100, both have the same recording patterns — cardioid and omnidirectional — and both can easily be put into microphone booms. I would say the Yeti Nano is a bit sturdier because of its heavier construction materials, but the DuoCast has a physical gain control button and a built-in shock mount. Both are pretty crucial reasons why the DuoCast sounds so good and eliminates a lot of background noise.

That being said, Blue’s app for controlling and modifying the sound of the Yeti Nano is compatible with Mac.

HyperX DuoCast: Should you buy?

You should buy this if…

You shouldn’t buy this if…

The HyperX DuoCast does exactly what it advertises. It’s not a studio-grade microphone, of course, but thanks to all of its features and great recording quality, it will work well in most situations.

The gain control knob, included pop filter, and shock mount all greatly reduce background noise and microphone movement, making it easy to record clean, clear audio when needed. Plus, its omnidirectional mode is great when you need to record multiple voices simultaneously.

The minimal design with a little RGB lighting is a nice aesthetic that shouldn’t stick out like a sore thumb in too many setups. The lighting isn’t too much to give it that “hardcore gamer” look you see a lot, but it’s enough to give the microphone a little flash of style.

It is unfortunate that HyperX’s Ngenuity software doesn’t work on Mac, but if you can look past that — and a lot of people can — I think you’ll find the HyperX DuoCast to be the perfect fit.

The HyperX DuoCast is the Goldilocks of USB microphones. Offering two recording patterns, fantastic quality, and some RGB lighting, it’s a perfect fit for anyone looking to record podcasts, attend meetings, or record a whole room full of sound. 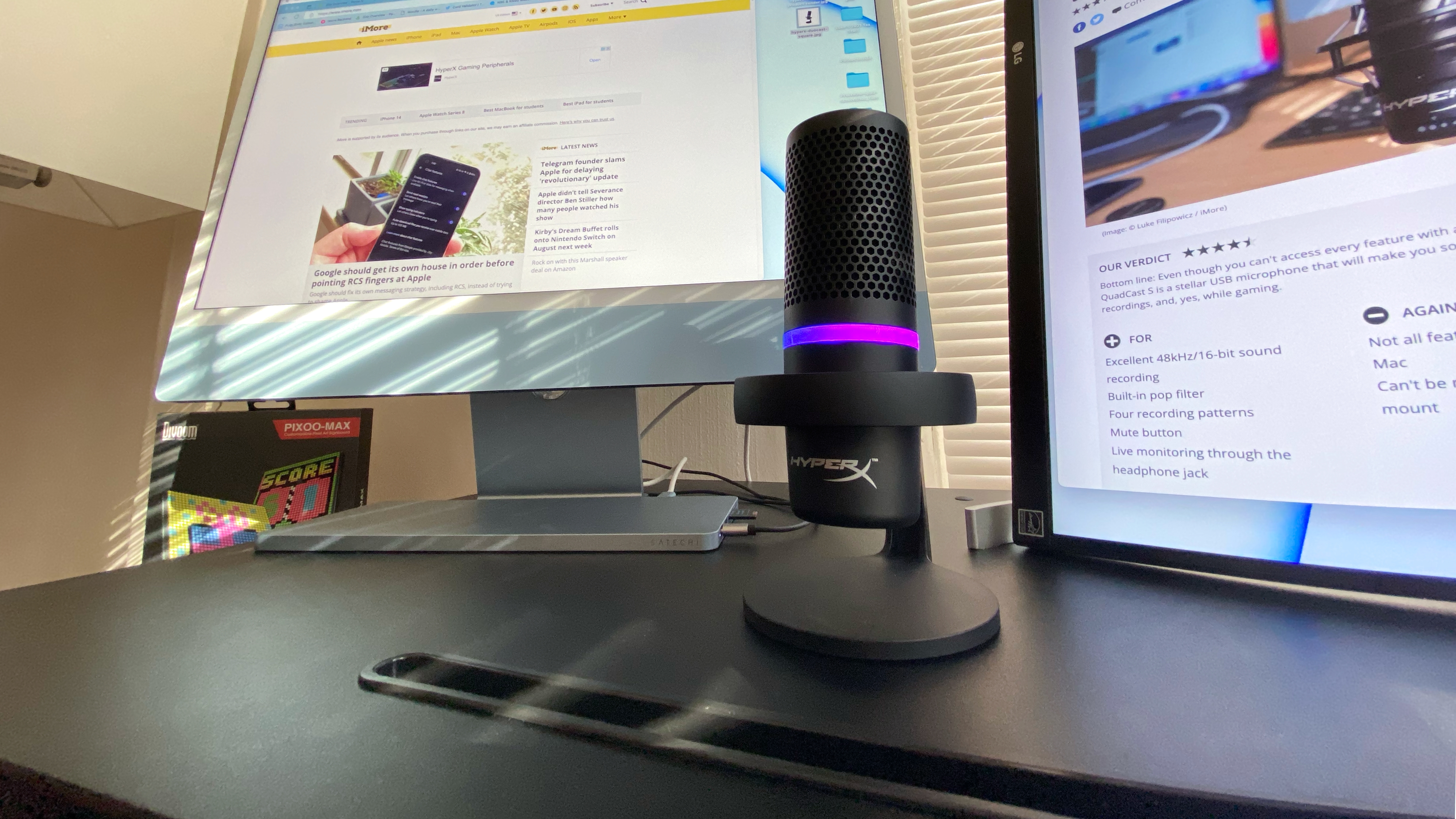