It wasn’t long ago that if you wanted to translate something in a photograph, you would need to copy down the text and either head to Google Translate or talk to a person who speaks that language. But Apple has simplified this process with the introduction of Live Text, which first appeared in iOS 15 for the iPhone.

This feature not only allows you to interact with text from a photograph but also have it translated into your native tongue. In this article we show how to use your iPhone to translate text in a photo.

What is Live Text?

Live Text is a clever iPhone feature that made its debut in iOS 15. (Live Text is expanded in the new iOS 16 update, but iOS 15 is fine for the features we’ll be using in this tutorial.) It employs various software techniques to analyze the data in photographs, recognize text and numbers, and make those elements selectable.

This can be very handy for quickly capturing businesses’ telephone numbers from their signs, collecting quotes from your favourite books, or any other situation where you need to quickly grab text from an image and paste it into other documents and apps. But there are also some built-in functions you can perform without even leaving the Photos app, such as translation.

You can read more about the feature in our how to use Live Text tutorial.

Which iPhones have the Live Text feature?

Live Text is available on a wide range of iPhones: the key thing is that they need to be running iOS 15 (or later). Here’s the list:

Live Text is also available on some iPads, which again need to be running iPadOS 15 or later. Here are the models that can use the feature:

One limitation to bear in mind is that, at the moment, Live Text is only available for a relatively small number of languages, including English, French, German, Italian, Spanish, and Chinese. You can find a full list of the languages available on Apple’s iOS and iPadOS Feature Availability page.

How to translate text in a photo using Live Text

Translating words with Live Text is very easy. Here are the steps to take:

Open the Photos app and find the image with text you want to translate.

Tap and hold a word until you see it highlighted. Now, use the grab-bars to select all of the text you want to translate.

A black menu bar will appear, with options such as Copy, Select All and Look Up. Tap the right arrow to see more options.

Tap Translate and you should see the translated text appear.

To see more of the features Apple has packed into its latest iPhone software, read Macworld’s iOS 15 superguide. To get a sneak peek at what’s coming next, have a look at our iOS 16 guide. 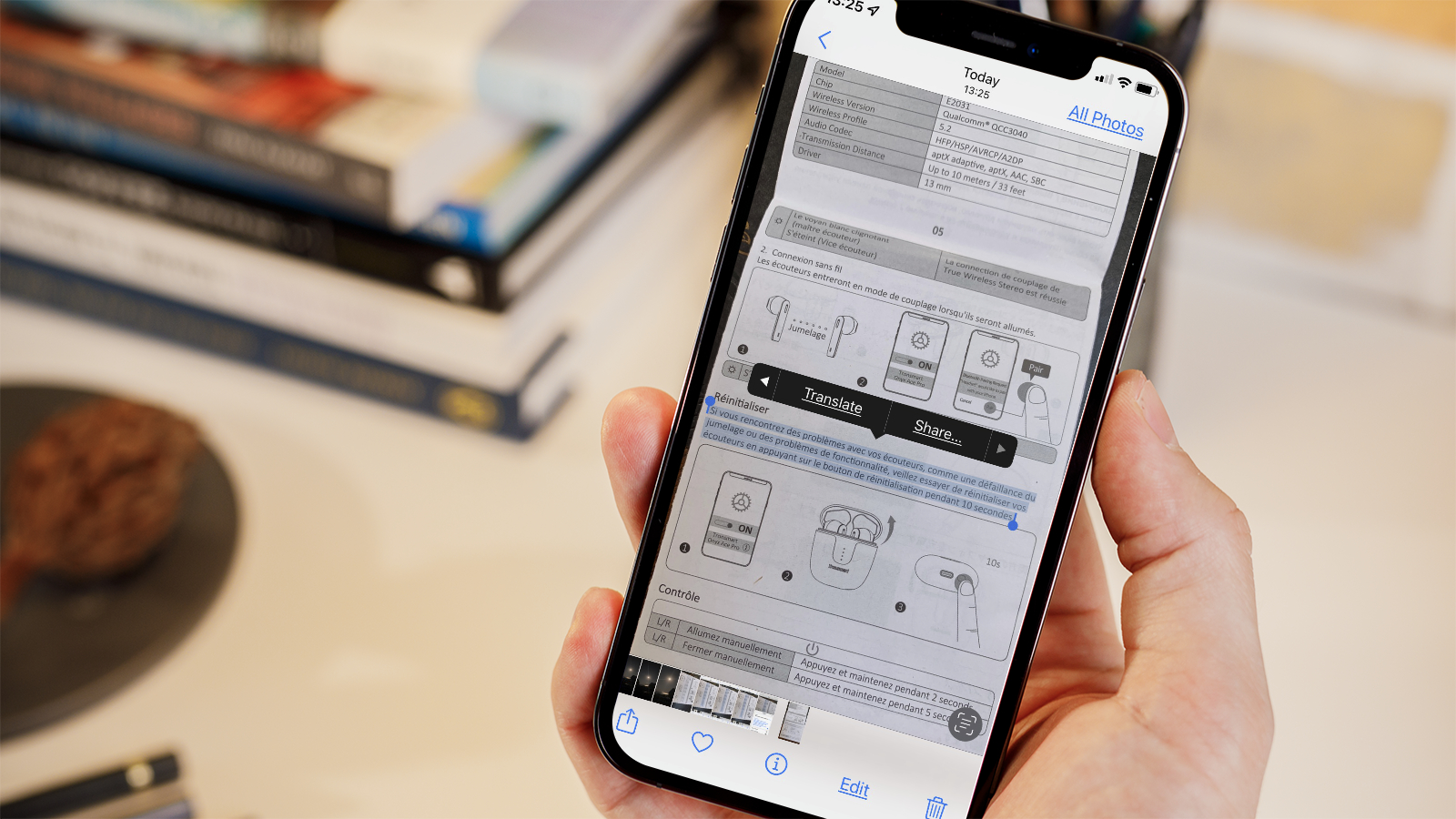